Hi, welcome back. Let’s continue the picture tour of “The Great Food Truck Race” with host Tyler Florence while they stopped in Denver last weekend. If you have missed part 1, please click here. 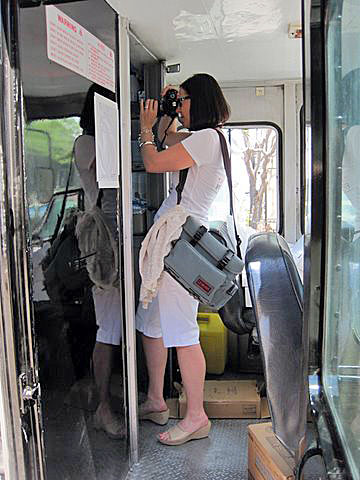 from Cleveland, Ohio, serving to die for comfort food!

You may ask yourself, so how did she end up being on set? Believe me, I really don’t know exactly.
While taking pictures of the Korilla BBQ’s crew and kitchen one of the producers approached me. I thought, oh no, now I am in trouble for always being so nosy. He will probably ask me to delete my pictures. I was totally wrong. It turned out, that the producer thought it would be of interest to show his viewers how social media affects  the increase in popularity the food trucks are having compared to the first season’s show. This also included food blogging and it happened that I was at the right place at the right time.

Oh, before I forget. Do I have a favorite?

Food:  Yes, Chef Hodges Angus Burger and the tiger tacos at Korilla BBQ.
Truck:  Well, it is hard to say. I believe that the Lime truck, Korilla BBQ and Hodge Podge seemed like the strongest teams.
Entertainment: No doubt at the Hodge Podge Truck on Sunday late afternoon where Chef Chris went wild after hours of service by himself. He was running over cars and after the ice cream truck while serving his customers.

So, maybe, I’ll be lucky and “My Kitchen in the Rockies” will make it on the show. Check out Food Network starting on August 14 at 10p following the Food Network Star finale. The episodes will show on Sundays at 9p through September 25 (I assume that is CST). My teens and I will be watching it no matter what.

I love your post, Kirsten! We have a great food cart culture here in Portland and it's fun to see how popular they are becoming around the country. You were in the right place at the right time, you lucky girl. I'll be watching for you on the food channel.

Wow! The Dawg looks great, but what I'd really like is one of those Crab Burgers!! Incredible photos inside the kitchens… can't wait for the show to air!

have you ever been to the cherry creek mall saturday farmer's market? food truck heaven. my fave is the something or other biscuit company.

Looks like such a fun time was had by all; so sorry I had to miss it!

I would love to see an event where all the food trucks in Denver are together. Would be great for them but even better for us!

Wow, Kristen, I wish that I could watch the show and see you being interviewed! It must be really exciting to be there watching the race. All the food looks good and I wonder who will be the winner!

It all just gives me chills!!! The food looks so wonderful and I love the picts of people in action! What a great day you guys had and I WILL BE WATCHING FOR SURE!!!!

You know I'll be watching no matter what and will squeal like a teenager if I see any of us on film. 🙂

Great photos Kirsten. I can't wait till it airs!

The Angus Beef Burger has made me smile, especially to find out it was one of your faves. Congrats on being in the right place at the right time too, now I really can;t wait for the show to come to the UK ;0)