Before we get to the recipe of this German cherry poppy seed cake I would like to share with you a little story from my previous life. I was working for several years at a pharmacy in my hometown in Germany. We had a dermatologist office located in the same building as the pharmacy. The […] 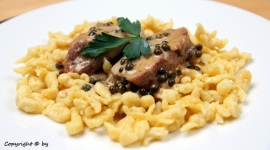 Pork Tenderloin with green peppercorn sauce is a very traditional German dish and one of my husband’s very favorite. Unfortunately I haven’t made it for him in forever. Somehow some recipes just get forgotten and hardly cooked anymore. Mr. Rockies was very happy when I suggested preparing it for some friends and him for dinner […] 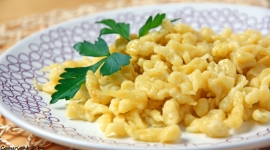 Spätzle is a noodle dish traditionally  served in the southern parts of Germany (Swabia or Bavaria). I was first introduced to making Spätzle from scratch through one of my friend’s from school. Her family came from Bavaria and her mom used to prepare homemade Spätzle all the time. There were four kids in the family and they […] 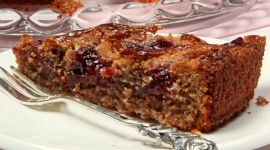 Linzertorte is a cake that originated in the Austrian city Linz probably around 1650.  It is said to be one of the oldest cake recipes and very well known in Austria, Hungaria, Switzerland, Germany, and Tirol.  Linzertorte is a crumby nutty dough that gets covered with marmalade and topped with a lattice of dough strips. […]

Today I am guest posting a German cake, Donauwelle, at “Cooking with Michele”. Michele is one of my local Denver food blogger friends that I highly admire because of her versatile talents. She takes clients to Italy on cooking trips, keeps a successful catering business and just finished her very first cookbook. She teaches cooking […]

Spiced Red Wine Cakeis a very traditional cake in Palatinate Germany, the wine region where I come from. This cake has always been a favorite of mine. We even served it at my wedding. I was in heaven after I found this recipe since my old red wine cake recipe lacked in taste after the […]

For the second Sunday of Advent I would like to share some Marzipan cookies with you. This is a new recipe to me, but since I am a big Marzipan lover and happened to have some in my fridge, these Marzipan cookies were a no-brainer to bake right after I discovered them on Kirsten’s blog […] 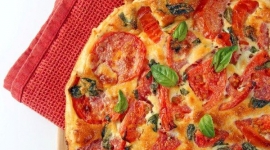 Don’t we all want to come home to a meal that is already waiting for us? Inviting us into the house with its irresistible smell? Imagine the table is set, the wine pored and the candles are lit. Wouldn’t that be a dream come true? For me it would. Especially after an evening freezing while […] 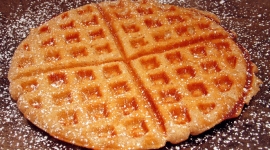 When I read this recipe at Petra’s blog childhood was calling me. I didn’t need to convince my daughter to help me baking some German style waffles. So, two hours later, while taking my first bite into warm, soft cinnamon waffles, my mind was taking me back being a little girl. I am sitting at […] 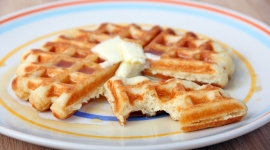 Dreams come true when your kids are finally old enough to treat you to a homemade breakfast, especially when the smell of crispy fluffy homemade waffles fills the air. What a special surprise. Yeast waffles are what my son served us last Sunday morning. He decided to bake waffles that use yeast as a raising […]