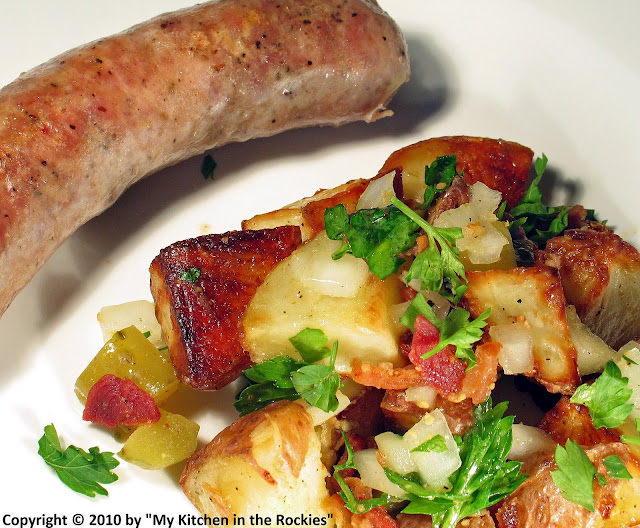 A few weeks ago I read about a potato salad made with roasted potatoes instead of boiled. I thought that this is one of the best ideas I have ever heard of. No more boiling and skinning the potatoes, less work in the kitchen, and the added flavor of a crispy roasted potato in the salad. What a splendid recipe idea! I had to try it right away and let me tell you that it was a huge success. This new version of my favorite potato salad recipe is just the best. My family loved it. Another keeper recipe in my household!!

I urge you to give it a try. This German potato salad recipe will let you forget any of your old ones!

Prepare Bratwurst according to package directions. I cook mine in some water/ beer until fully cooked through. Then I discard the liquid and fry them on both sides to get a nice coloring. That way they stay really moist and won’t burn during the cooking process.

Preheat oven to 400 F.
Place potatoes on a baking sheet. Sprinkle with olive oil and season with salt and pepper. Roast in the oven until cooked and the outsides are baked crunchy.

Place baked potatoes in a big bowl; add onion, pickles, bacon, parsley. Pour some olive oil, vinegar, and broth over the mixture, season with salt and pepper. Mix the salad and let it rest for a little while. Season again if necessary.

@Bolli: Hat auch super geschmeckt.
@Susi: Ja bitte , ist total lecker.
@One of: Plaese, it is very tasty.
@baking: That was my first thought when I found it.
@Rosanne: Hope you like it as much as your mother in laws.
@Lamiacuccina: Ja, war mir auch neu but what a great find.
@12man: you should have told me earlier. Oh, roasted garlic, another keeper!
@sommer:Yes, it really does. I Loved the taste.

This sounds wonderful! I like to roast them for salad as well. It adds such great color!

We often make potato salad with roasted potatoes. Or better, grilled. Try 'em with balsamic instead of plain vinegar. And if you can roast some garlic at the same time, make the paste your dressing. Yumm!

Summer Solstice is today, but here's an astronomical factoid if you need another reason to celebrate the warmer weather. Summer solstice is the longest day of the year, and also marks the point where Earth is furthest from the sun. But, because of inertia, July 4-5 are typically the "slowest" days of the year: the days in which Earth's orbital speed is the slowest. That's why everyone is so laid back in the summer!

This looks fabulous! My mother-in-law has made a version of this recipe for years, but she doesn't roast her potatoes. I will definitely try this one!

I love the idea of baked potatoes in potato salad. What an awesome find!

I have to try this potato salad recipe. It sounds great.