The other day, while shopping, I overheard a conversation in the produce department in which two costumers were trying to figure out what the name of a vegetable was they had never bought and cooked with. I was astonished to see they were talking about leeks. In the German or French cuisine fresh leeks are […] 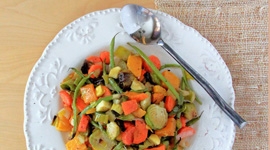 My teens have a long list of vegetables they would rather me not put in front of them. I know for sure that brussel sprouts make the top of the list or let me say used to be on the top of the list since last weekend. The other day I served some grilled […] 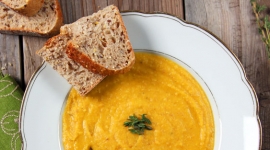 Here is my twist on a traditional pea soup the way I remember my German aunt preparing it. She served pea soup with some rustic bread and a Frankfurter sausage. My variation substitutes bacon for the sausage and uses the sweeter yellow split peas. I also added lots of veggies including leek, carrots, onions […] 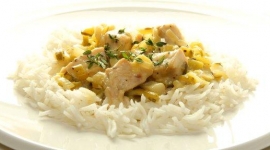 Thanks to my local blogger friend Toni, the Boulder Locavore, I still had lots of green garlic left after preparing an unbelievably tasty green garlic risotto the other day. On a recent trip to visit Toni in Boulder, she had given me two big bundles of young garlic that she had purchased at a local […]

Roasted Cauliflower and Leek with Chorizo served on Gruyère Flatbread 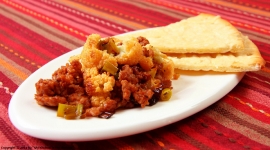 In almost every family, some nights can most definitely be crazier then others. At times, whatever is in the fridge will have to do. This is one of these hodge podge dinners that turned out a lot better than I thought. Oven roasted veggies mixed with spicy chorizo, served on top of Gruyère sprinkled flat […] 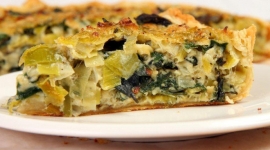 Quiches and Tarts are very traditional in the Alsace area of France, which is very close to my Palatinate home in Germany.  A lot of dishes are shared across the border and therefore, quiches have been in my recipe repertoire since I started cooking for my family. This leek and red chard tart is especially […]