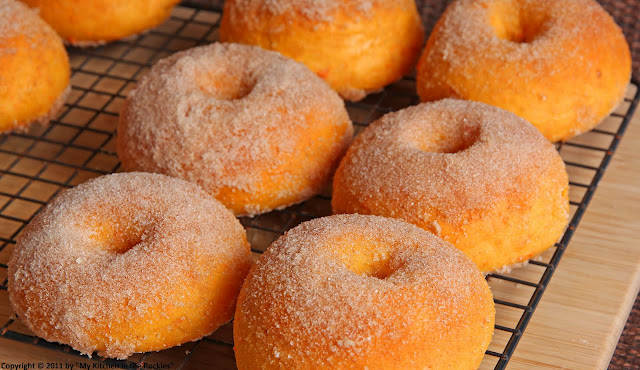 Golden, airy, soft, and sweet clouds of doughnuts straight from baker’s heaven, that’s what they are. No more messy deep frying necessary ever!! Sweet potato doughnuts are perfect straight out of the oven. They are spiced with nutmeg, rum, browned butter and a cinnamon-sugar topping. Don’t miss out, cinnamon baked sweet potato doughnuts will be one of the most delicious treats you have ever eaten!

This was my very first attempt in baking doughnuts (and the fourth time in my life making my own yeast dough). I didn’t have a cutter for the doughnuts (like you can probably tell) and so I just used some ordinary biscuit cutters. The dough was still sticky after adding all the flour and also didn’t double in size after the first rise. I told myself not to panic, kneaded in a little bit more flour, proceeded in rolling the dough and cutting out the doughnuts. The second rise made a big difference in which the doughnuts doubled in size. I was so happy. Once baked and out of the oven the doughnuts got basted with butter and rolled in the cinnamon-sugar mixture. You can see the light and airy result in the following picture.

I was astonished in how easy it was to make my own doughnuts. They were also lighter , better tasting and “healthier” (is there such thing as a healthy doughnut?) than any store bought doughnut. So, don’t be afraid. If I can do it, so can anybody! Cinnamon baked sweet potato doughnuts will be a keeper goody for special occasions in my family! 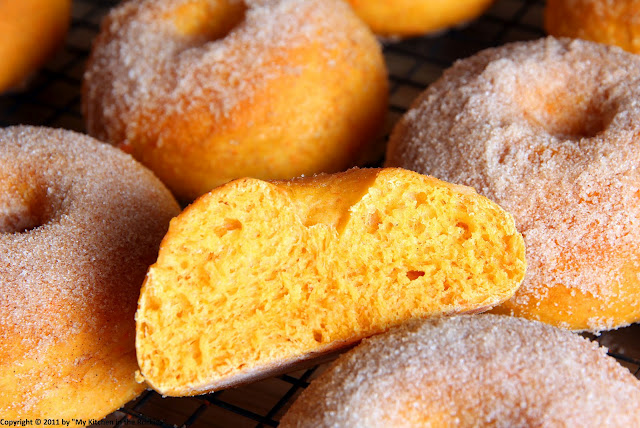 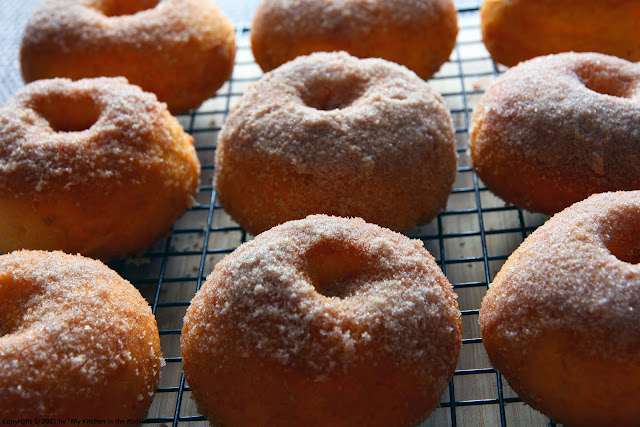 Prick the skin of two sweet potatoes with a fork and cook them in the microwave until done, about 10-12 minutes. (I used the “boiled potato” setting of my microwave which cooked them automatically.) Half the potatoes and spoon out the flesh. Puree it in a small food processor until it has the consistency of ordinary mashed potatoes. Set aside 12 ounces (1 cup) of sweet potato puree.

Place the butter in a small sauce pan and cook on medium heat until the butter turns brownish. Be very careful not to burn it! Set aside to cool.

Heat the milk (around 105 F, 40 C) in a small sauce pan or in the microwave and add the yeast. Let it sit for about 5 minutes and until foamy.

Attach your kitchen machine with the dough hook and mix together the milk/ yeast mixture, both sugars, salt, vanilla seeds, nutmeg and rum. Now add in the egg, the yolks, the browned butter and the sweet potato puree. Mix until well combined. Now it is time to add all the flour, first on slow speed to mix it all in and then on medium speed to knead the dough. Knead for about 5 to 6 minutes. If the dough is still too wet add more extra flour until the dough forms a ball. Place the dough into an oiled glass bowl, cover with a clean kitchen towel and let it rest and rise for 1 1/2 hours. I used my “rapid proofing” setting of my oven but it didn’t really rise that much. So, don’t worry!

Place the dough on a well floured surface, punch it down, knead in more flour if still to sticky and roll it out to about  3/4 inch thickness. Cut out your doughnuts and place them on a silicon lined baking sheet. Reroll left over dough to form more doughnuts. I had two baking sheets with 19 doughnuts total.

Cover doughnuts with clean kitchen towels and let them rise for a second time for about 1 more hour or longer until the doughnuts have risen light and fluffy.

Preheat the oven to 400 F. Don’t use Convection! Bake the doughnuts in the center of the oven for about 15 to 20 minutes.

Baste hot doughnuts with butter and roll in the sugar-cinnamon mixture. Let cool on rack or serve still fresh and warm. Enjoy! 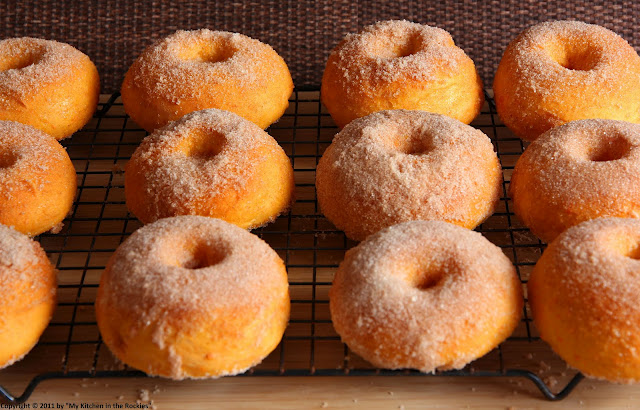 Adapted from “Food &Wine” and fifteenspatulas.com.

Kirsten,
Thank you for fast reply and for the suggestions, but wandering around the blog I found yet another wonderful thing that I have to-have to make: your mint chocolate bundt! 🙂 I am a declared chocoholic and mint lover… And, as I said, because your blog is an inspiration, I just used the raisins that have been soaking in Malibu Rum in a jar in my fridge (leftovers from some stuffed rum balls… 2 weeks ago) in a sweet bread that is now baking in my oven 🙂 Thank you!! I'll let you know how the treats Friday goes mid-September. Roxana

Roxana,
The donuts always taste better fresh. I would recommend baking one of my cakes that keep better, like the Linzer Torte or Apple cake. The Blueberry Streusel from this month keeps really well, too. Thank you so much for enjoying my blog. That makes me very happy!
I hope your Friday treats will be a success.
Yours
Kirsten

Hi Kirsten and congratulations for the blog – amazing and inspiring recipes!! I have a question: we have a "Friday treats" tradition in my office and my turn to bake some goodness is coming soon. I like to offer people something different than muffins or banana loafs or brownies and so far, I have managed to impress the crowd, but now I am looking for new ideas. I'll make your ricotta-lemon loaf (and it's a blessing that you say it tastes better the next day 🙂 and was thinking of making these sweet potato donughts, too – but my fear is that if I bake them the night before, will they be as yummy the next morning? 🙂 Can you please help? Thank you very much and keep the wonderful recipes coming!!! 🙂 Roxana

Oh my goodness – healthy donuts! I can't wait to make them myself, especially since you pointed out they are practically foolproof (I don't mean that in an offensive way 🙂

Your doughnuts looks beautiful! Glad you made them =)

These donuts look insanely good! I'm going to have to try to make these gluten free. Ditto the sweet potato add!

Your doughnuts rock! These look fabulous. I love the idea of the addition of sweet potato. Awesome. Thanks for sharing.

So, Im glad that I fell upon your site. Tastespotting is devine for this sort of thing. I looked at this recipe and thought… yummy! Then I looked at your site name and I thought Oooooo! I live in Puno Peru, which is 12,000 ft above sea. CRAZY! As you can imagine, baking is a pain! In fact, I made this cake tonight and it literally took two hours to bake. Oh man. Well, I will definitely be following you!

Yes! This is exactly what I've been wanting to make! They're baked and they have sweet potato, so they're healthy, right? DONUTS EVERY MORNING.

These look amazing. I could gobble these up in an instance.

Ohhhh!!! Those look SO good…I MUST try them soon!! Thanks for sharing.
Linda in Colorado Springs.

Oh my! I've heard of potato doughnuts but not sweet potato ones…these look so fabulous!!

Kirsten – these look fantastic. baked doughnuts are just as tasty, if not more than, as the fried version. it's been awhile since i've baked any but there was a period when i got frustrated with some yeast recipes. thanks for getting me motivated with these beautiful pics.

I saw your post on Facebook and was intrigue by your doughnuts. I love sweet potato doughnuts and baking them is so healthy. I'm glad I found you!

This look so good Kirsten! My yeast dough experiences have just starting working out all of the sudden too. It has brought a whole new dimension to my baking. Don't you just love it.

I have never seen a sweet potato donut – genius! Thanks for sharing:)

OMG! I am going to make these very, very soon, and hope I don't eat the entire batch myself. They sound and look spectacular!

Yum! I have always made donuts that required deep frying so I don't make them very often due to the fact that they are not very healthy. These look and sound great with not only the sweet potatoes but the baking rather than the frying method! Thanks, can't wait to try these. Beautiful photos!

Love, love this! I'm gonna put it on my fb page! We have all been planting our sweet potatoes around here. On second thouught would you like to put this on my blog as a guest? Jill