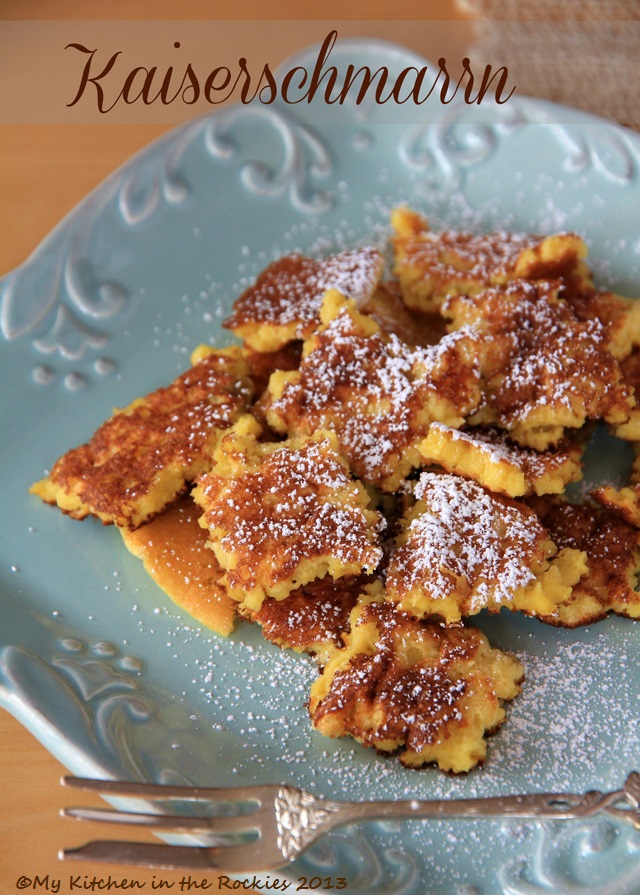 Kaiserschmarrn is a true staple in the Viennese cuisine. Literally translated it means emperor’s nonsense, but looking at the dish you can probably easily see that we are talking about shredded pancakes. Kaiserschmarrn originated in the kitchens of the poor and is a dish that often uses up left overs pancakes. It contains rum soaked raisins in the batter, is served with some fruit on the side and dusted with powdered sugar.

The Kaiserschmarrn in the picture was actually prepared by my son. It was a project for his German class in High School. Why was an Austrian dish chosen? Well, that is a good question. I assume that most American guests visiting Germany end up touring only the southern part of the country (Bavaria) which shares a lot of traditions, also reflected in the food, with the neighboring country of Austria.   Therefore it is probably assumed that the served dishes are German. The students were paired in teams and my son and his partner picked a Kaiserschmarrn recipe that resulted in a very light and airy pancake, since all the egg whites are beaten separately and folded into the batter right before frying. It took him a while to separate all the eggs (he tripled the recipe), but since he has been preparing waffles (at first under the supervision of my husband) on Sundays since he was a very little boy, he did just fine. I have to say that both of my teens are very handy in the kitchen and that I am very proud of them. Did you ever have the chance to try out Nico’s favorite yeast waffles? They are outstanding!

Kaiserschmarrn can not only be served as dessert but also as a main course. I think my kids would be very happy coming home to Kaiserschmarrn as their dinner once a week. Surprise your family with something old, but somehow new. Kaiserschmarrn, a new pancake dish from the old world will have everybody raving. 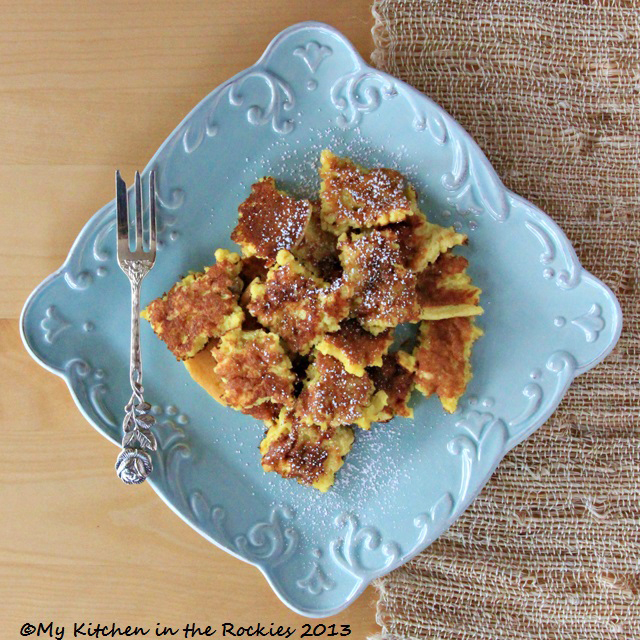 Recipe type: main, dessert
Cuisine: Austrian
Author: Kirsten | My Kitchen in the Rockies
Prep time: 20 mins
Cook time: 10 mins
Total time: 30 mins
Serves: 3-4
Ingredients
Instructions
Notes
Don't be worried, the batter is very liquid. Make sure to have the batter evenly mixed before pouring into the pan, since the egg white tends to float on the top.
Wordpress Recipe Plugin by EasyRecipe
3.2.1230 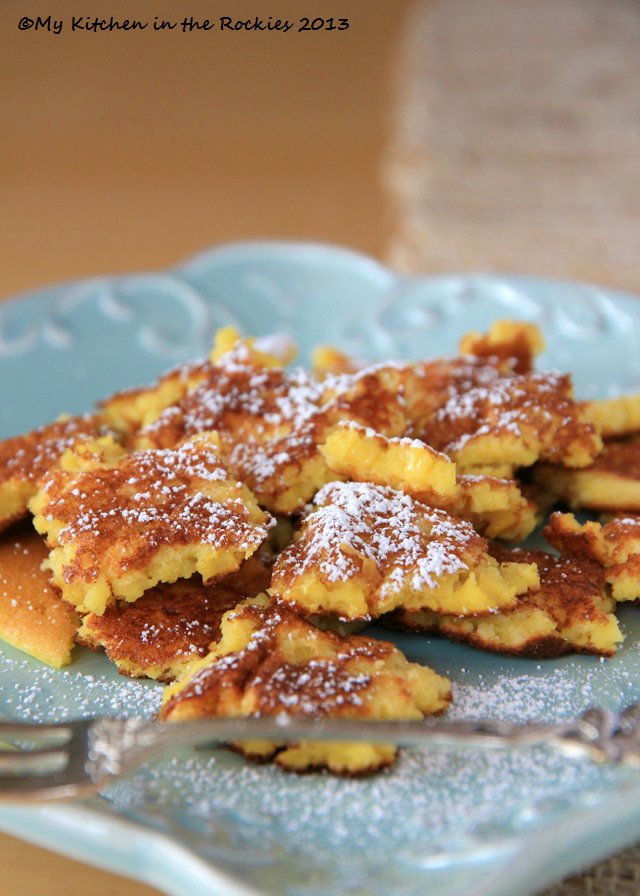 If you have to prepare Kaiserschmarrn for a bigger crowd or try to prepare the dish ahead, which my son had to do, since he wasn’t able to serve the finished dish right away, just set your oven on warming and keep your prepared Kaiserschmarrn in a covered casserole dish until needed. Sprinkle with powdered sugar after a portion of the Kaiserschmarrn is placed on the actual serving plate. In my son’s case, he kept the finished dish in the warming oven and the mom taxi delivered the Kaiserschmarrn in a portable warming container to High School  right before German class started. (The mom cab actually went to the High School four times that day to accommodate individual pick up times and deliveries.)

Looks delicious – this is on my list to make! I enjoyed some Kaiserschmarrn while in Tyrol served with some black cherry syrup. 🙂

This looks amazing! Love the name, just wish I could pronounce it! I hope you & your son got a good grade!

this recipe sounds great, but I don’t see the amount of flour to add in your ingredients?

Thanks for noticing, Lily. Fixed!

These sound so delicious, thank you for the recipe!

Your photographs are always amazing!! Do you have an awesome camera? Or are you as talented a photgrapher as you are a chef?

Thank you Darcy. I shoot with a Canon T2i Rebel. I think the lens you use makes all the difference. My food pictures are all taken with a EFS 15-85 mm lens. Lately I use more and more natural light. On dark night s I include my bee lights, which I love. Thanks again for your complement.

VERy warm and welcoming, not to mention healthy!
Wanting some of these now on this cold winter’s day is ME!
Cheers! Joanne

What a fascinating dish–love the sound of it, and the cute blue plate, it’s lovely!